This is an Open Access article distributed under the terms of the Creative Commons Attribution Non-Commercial License (http://creativecommons.org/licenses/by-nc/4.0/) which permits unrestricted non-commercial use, distribution, and reproduction in any medium, provided the original work is properly cited.

Although physical fitness in adolescents has been widely studied, there is the lack of information regarding developmental patterns of various youth fitness components. The LMS (L=skewness, M=median curve, and S=coefficient of variation) statistical method has been utilized to develop growth percentiles for height and weight as well as for fitness in the US and Europe countries. The purpose of this study was to develop age- and sex-specific smoothed percentile curves for fitness using the LMS method in Korean adolescents aged 13-18 years.

A norm-referenced evaluation that provides the relative position of an individual’s physical fitness level within a group is one of the most common ways to assess physical fitness.8 However, most of Korean youth fitness studies has been expensively reviewed in relation to the obesity.9-11 There were several studies on secular fitness trends for adolescents.5,12,13 In 2009 youth fitness criteria was set for the Physical Activity Promotion System (PAPS), but has some limitations such as selection bias in sampling and statistical modeling of growth status.14 Thus, norm-referenced fitness evaluations are needed with a large nationally representative sample in order to develop physical fitness reference for Korean adolescents which reflects growth.8

LMS (L curve=skewness, M curve=median, and S curve= coefficient of variation) method has recently been used to identify reference values that affect growth status in adolescence (right skewed distribution).7,15,16 The method has also been used in the development of growth charts in the US and UK to present physical fitness percentile curves by age and sex17,18 and in the development of WHO growth charts in 2006.19

Table 1 . Physical characteristics of the participants.

The components suggested in the National Fitness Award Project (i.e., body composition, aerobic capacity, muscular strength, muscular endurance, flexibility) were set as the parameters for physical fitness. The national physical fitness test items showed a high consistency, with reliability ranging from 0.87–0.99.21 All items were measured by a certified, professional health and fitness instructors.

The physical fitness battery of The National Fitness Award Project is composed of aerobic capacity (Progressive Aerobic Cardiovascular Endurance Run: 20-m PACER), muscular strength (handgrip strength), muscular endurance (partial curl-up; 30-s endurance jump), and flexibility (sit and reach test). For the 20-m PACER, the maximum number of repetitions was recorded, and maximal oxygen uptake (VO2max) was calculated using a quadratic model based on the 20-m PACER measurement.22 Handgrip strength was individually measured twice for the left and right hands, and the highest value was recorded to the nearest 0.1 kg. For the partial curlup, the maximum number of repetitions at the beep was recorded. Sit and reach was performed twice, and the highest measurement was recorded to the nearest 0.1 cm. For the 30-s endurance jump, the number of jumps performed in 30 s was recorded.

All data were presented as means and standard deviations. Statistical analyses were performed using SPSS v 18.0 (SPSS, Chicago, IL, USA) software, with the level of significance set to .05. Body composition and physical fitness were compared by sex using oneway analysis of variance (ANOVA).

Physical fitness was presented in age- and sex-specific percentiles (5th, 10th, 25th, 50th, 75th, 90th, and 95th) and curves using the LMS method. The LMS method provides a way of estimating percentile curves that are smoothed according to the maximum penalized likelihood. To compute physical fitness percentiles, we separated gender and used z-scores that were estimated by applying L curves by age (Box-Cox power to eliminate skewness), M curve (median), and cubic spline curve, a cubic function of the S curve (coefficient of variation). LMS chartmaker software (Light V.2.54; by Tim Cole and Huiqi Pan) was used to compute L, M, and S values and percentiles.

Characteristics of the participants were presented as body composition and physical fitness parameters by sex (Table 1). Boys (15.4±1.6years) were older than girls (15.1±1.6 years) (< 0.001). With regard to body composition, boys had greater height, weight, and BMI, but girls had higher percent body fat (<0.001). With regard to physical fitness variables, boys showed better performance in the following components: 20-m PACER, estimated VO2max, handgrip strength, partial curl-up, and 30-s endurance jump (<0.001). On the other hand, girls showed better performance in sit and reach (<0.001). 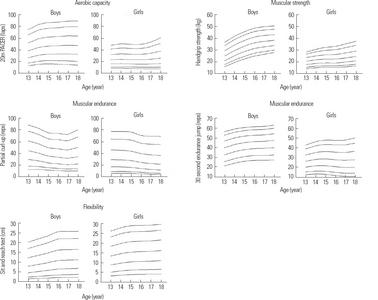 Boys showed better 20-m PACER performance than girls did. Whereas boys showed increasing aerobic capacity with advancing age, with a plateau after age 16, girls showed consistent aerobic capacity as they aged. This is consistent with the general knowledge of growth and development of cardiorespiratory fitness by age in male and female adolescents.24 The difference in cardiorespiratory fitness by sex may reflect the increased muscle mass and oxygen delivery associated with increased male hormones (testosterone) in male adolescents following puberty.25 Based on the aerobic capacity criterion suggested by PAPS26, only a small proportion of students were in the top grades (grades 1 and 2), while a larger proportion of students were in the lower grades (grades 4 and 5), among both boys and girls (boys>grade 2: 34.7%, <grade 4: 42.5%; girls>grade 2: 26.6%, <grade 4: 46.9%). In other words, most boys and girls had low aerobic capacity, which was in line with the findings of a previous study that reported deterioration of physical fitness in adolescents in accordance with differences in generations.12 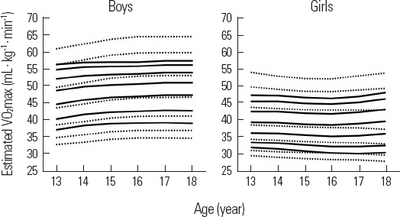 Handgrip strength, a component of muscular strength, was greater in boys than in girls. Muscular strength increased with advancing age and plateaued after the age of 16 in boys, while it remained largely unchanged in girls, even with advancing age, similar to previous findings.5 Such differences in muscular strength between boys and girls are a result of the differences in sex hormones that are produced after puberty. Whereas boys have a rapid increase in lean body mass, girls only have a mild increase of lean body mass due to increased body fat mass.25 Based on the PAPS handgrip evaluation criterion26, only a small proportion of students were in the top grades (grades 1 and 2) while a larger proportion of students were in the lower grades (grades 4 and 5) in both boys and girls (boys>grade 2: 16.2%, <grade 4: 48.0%; girls >grade 2: 18.1%, <grade 4: 41.8%). In other words, most boys and girls had low muscular strength. 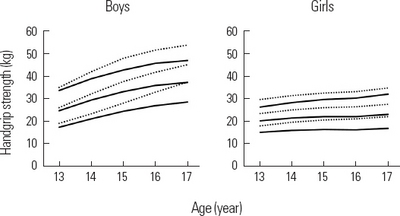 There was a decreasing trend in partial curl-up performance in both boys and girls with advancing age, which was similar to the results of a previous Korean study.5 Based on the PAPS partial curlup criterion26, only a small proportion of boys were in the upper grades (grades 1 and 2), with a higher proportion in the lower grades (grades 4 and 5), while the opposite was true for girls (boys>grade 2: 16.9%, <grade 4: 47.4%; girls>grade 2: 32.4%, <grade 4: 28.1%). In other words, boys had lower muscle endurance while girls had higher muscle endurance than boys.

Girls showed better sit and reach performance (flexibility) than did boys. Flexibility increased with advancing age in both sexes, with only mild increases after the ages of 16 for boys and 15 for girls, which was similar to the findings of a previous study.5 This trend was similar to that for growth and development of flexibility in adolescents by age24, and the sex difference in the development of flexibility is presumed to be a result of greater growth of sitting height (trunk length) in girls after the age of 11.32 Based on the PAPS criterion for sit and reach26, a high proportion of the students was in the top grades, but a smaller proportion was in the lower grades in both sexes (boys >grade 2: 48.8%, <grade 4: 30.0%; girls>grade 2: 64.3%, <grade 4: 25.4%). In other words, most boys and girls showed relatively good flexibility.

A limitation of this study, despite the use of large-scale data, is the use of reference values based on a cross-sectional analysis. A longitudinal study, which continuously follows-up on growth and maturation over time, is required to achieve complete understanding of the development of physical fitness in adolescence. However, the representativeness of our sample is largely unchanged from that shown by the 2007 Growth Charts for Korean Children and Adolescents suggested by the Centers for Disease Prevention and Control (z-scores of sex- and age-specific height, weight, BMI 0.01-0.20±0.9-1.2).20

This study was supported by research grants from Korea Sports Promotion Foundation. The authors thank the participants for their time and effort during this study.

Physical characteristics of the participants