Endogenous Cushing’s Syndrome in a Patient with Systemic Lupus Erythematosus

This is an Open Access article distributed under the terms of the Creative Commons Attribution Non-Commercial License (http://creativecommons.org/licenses/by-nc/4.0/) which permits unrestricted non-commercial use, distribution, and reproduction in any medium, provided the original work is properly cited.

Systemic lupus erythematosus (SLE) is an autoimmune disease for which glucocorticoids, which have both immunosuppressive and anti-inflammatory effects, are an effective therapy. We report an interesting first case of a patient with SLE accompanied by Cushing’s syndrome due to adrenal adenoma in Korea.

A 51-year old Korean woman with a longstanding history of SLE from the age of 27 years initially presented in 1991 with malar rash, polyarthralgia, myalgia, proteinuria, positive antinuclear antibodies (speckled type), anti-DNA antibodies, rheumatoid factor, and LE cells. From these findings, she was diagnosed with SLE. She was treated with a glucocorticosteroid (prednisolone). She underwent steroid pulse therapy in 1992 and plasmapheresis and cytoxan pulse therapy in 1993. Her lupus activity remained stable for 7 years before she presented to our hospital in February 2010, at which point she was being treated with 2.5 mg of prednisolone per day. She was referred with a clinical impression of Cushing’s syndrome because of weight gain (10 kg/year), easy bruising, development of moon facies, truncal obesity, acne, and menstrual disorder. She was admitted to our hospital for Cushing’s syndrome evaluation because of positive findings on a screening test (increased 24-hour urine free cortisol; 1,494.74 μg/day) and a 3-cm-sized left adrenal mass (Fig. 1A) detected in our outpatient department. 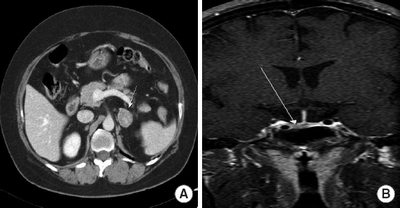 On admission, her blood pressure was 110/70 mm Hg. Height was 156.3 cm, and body weight was 82.35 kg. Her body mass index was 33.71 kg/m2. Complete blood cell count showed the following: white cell count 12,090×109/L with 84% neutrophils, hemoglobin 14.6 g/dl, and platelet count 227×109/L. Evaluation of serum chemistry revealed lactate dehydrogenase 627 IU/L, C-reactive protein 0.3 mg/L, and an erythrocyte sedimentation rate of 5 mm/h. Anti-nuclear antibody was 1:80 and 1:160 for homogenous and anti-cytoplasmic types, respectively. Assays for anti-DNA (anti-deoxyribonucleic acid), anti-CCP (anti-citrullinated protein), anti-RNP (anti-ribonucleoprotein), anti-Sm (anti-Smith), anti-SS-A/B (anti-Sjogren’s-syndrome-related antigen A/B), anti-Ro-52 (TRIM21, tripartite motif-containing protein 21), anti-Scl-70 (anti-topoisomerase I), anti-Jo-1 (anti-histidyl-t ribonucleic acid synthetase), anti-centromere B, anti-nucleosomes, anti-histones, lupus anticoagulant, anti-cardiolipin, anti-platelet antibodies, and rheumatoid factor were all negative. Concentrations of serum C3 and C4 were normal. Plasma ACTH level at 8:00 am and 11:00 pm was 13.52 and 16.58 pg/mL, respectively, and cortisol level at 8:00 am and 11:00 pm was 21.52 and 21.02 μg/dL, respectively; both were consistently high without circadian changes. The twenty-four hour urinary excretion level of 17-hydroxycorticosteroids (17-OHCS) was 10.7 mg/day. Serum cortisol was not suppressed by low-dose (2 mg for 2 days) or high-dose (8 mg for 2 days) dexamethasone administration (Table 1). Levels of other hormones, including 24 hours urine metanephrine, normetanephrine, vanillylmandelic acid (VMA), epinephrine, and norepinephrine, were within normal ranges. Magnetic resonance imaging of the sella was performed based on the differential diagnosis and showed a pituitary microadenoma in the right posterior aspect of the pituitary fossa (Fig. 1B). A basal pituitary hormonal study showed normal findings. From these findings, the patient was diagnosed with Cushing’s syndrome caused by a left adrenal adenoma.

The patient underwent laparoscopic left adrenalectomy in April 2010. A tan-yellow 3×3 cm solid mass was found in the left adrenal cortex. Microscopic examination revealed that the mass was an adrenal cortical adenoma. After surgery, she received 15 mg/day of prednisolone as replacement therapy for 1 month and successfully tapered after 3 years. She did not experience SLE exacerbation. Five years after surgery, she remained healthy with relief of her symptoms. Her last abdominal computed tomography in 2012 showed no evidence of recurrence of the adrenal lesion. The last follow-up sella MRI in March 2015 showed regression of the pituitary adenoma.

It is speculated that an endogenous excess of glucocorticoids could suppress autoimmune activities. However, the varying courses of preexisting autoimmune disease activity have to be considered. A rebound in abnormal autoimmune activity may be induced by abrupt reduction in endogenous glucocorticoids after treatment for Cushing’s syndrome. Careful attention must be paid to the development of occult autoimmune disease after treatment for Cushing’s disease, since excess glucocorticoids can suppress autoimmune processes. Shimizu et al.2 assessed elevated endogenous glucocorticoids and replaced them with a sufficient dosage of prednisolone, using the 24-hour urinary excretion level of 17-OHCS.2 The present patient’s status is closely monitored with 24-hour urinary free cortisol and the 1-mg dexamethasone suppression test. After adrenalectomy, the patient has not shown any evidence of recurrence of Cushing’s syndrome for 5 years. Over 1 year, glucocorticoid replacement was completely tapered, and she has remained in a remissive state of SLE without flares.

There is no conflict of interest that could be perceived as prejudicing the impartiality of the research reported.