This is an Open Access article distributed under the terms of the Creative Commons Attribution Non-Commercial License (http://creativecommons.org/licenses/by-nc/3.0) which permits unrestricted non-commercial use, distribution, and reproduction in any medium, provided the original work is properly cited.

Obesity-induced insulin resistance is an important risk factor for type 2 diabetes and cardiovascular disease. However, as potential mechanisms of increased insulin, how oxidative stress (OS) advanced glycation end-products (AGEs) can be changed through exercise is not fully understood.

Table 1 . Body weights of four groups before and after 8 weeks of exercise. 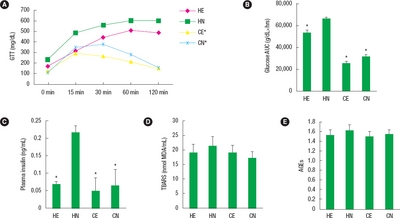